These are the apartments I currently reside in, they are now named after the States monopoly square. Researching the St. Petersburg City directories in the Main Library I found that in the past they were known as the “LaClair” or the “Le Claire” apartments, maybe even some other variants in different years , google newspaper archives all show “LaClaire”. Even prior to that they were called the “Hickok Apartments” according to the city directory of 1940.

The property appraisers office shows this building with a 1920 construuction date.

Google newspaper archive found that some things never change when a beer party in 1956 was halted by police at my current residence! 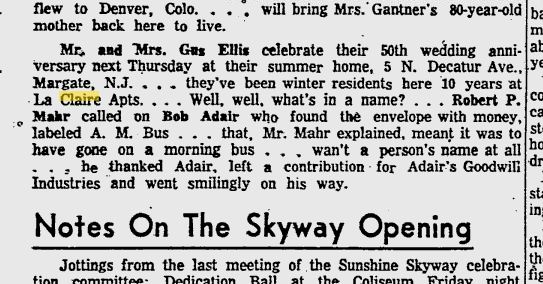 This entry was posted in The Game Board. Bookmark the permalink.
Loading Comments...