This is the first property of Times Square that I lived in when I arrived in downtown St. Pete. The property is currently known as Boardwalk, the most expensive stay in the board game Monopoly but truly affordable in real life. It was originally known as the “Carolyn Apartments“.

The property appraisers office shows a build date of 1920 and the sidewalk outside the buildings front door step is marked with a date close to that.

Researching the property in the Google newsparer archive accessible through the tampabay.com site yeilded very little about the buildings early history with the exception of a tea party in 1941 held to wish farewell to a group of what is commonly called now “snowbirds”. A 1924 reference, the earliest, greeting a Mrs. Clara Rich Carter of Chicago to her new home in the city.  And finally an accident report for aone J. Butler who damaged his roadster, he was listed as a resident of the Apartments. 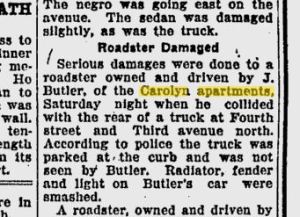 The property was also part of a housing authority investigation along with the Emerson apts in the 1970’s.

An ad for the Carolyn apartments in 1922-

This entry was posted in The Game Board. Bookmark the permalink.